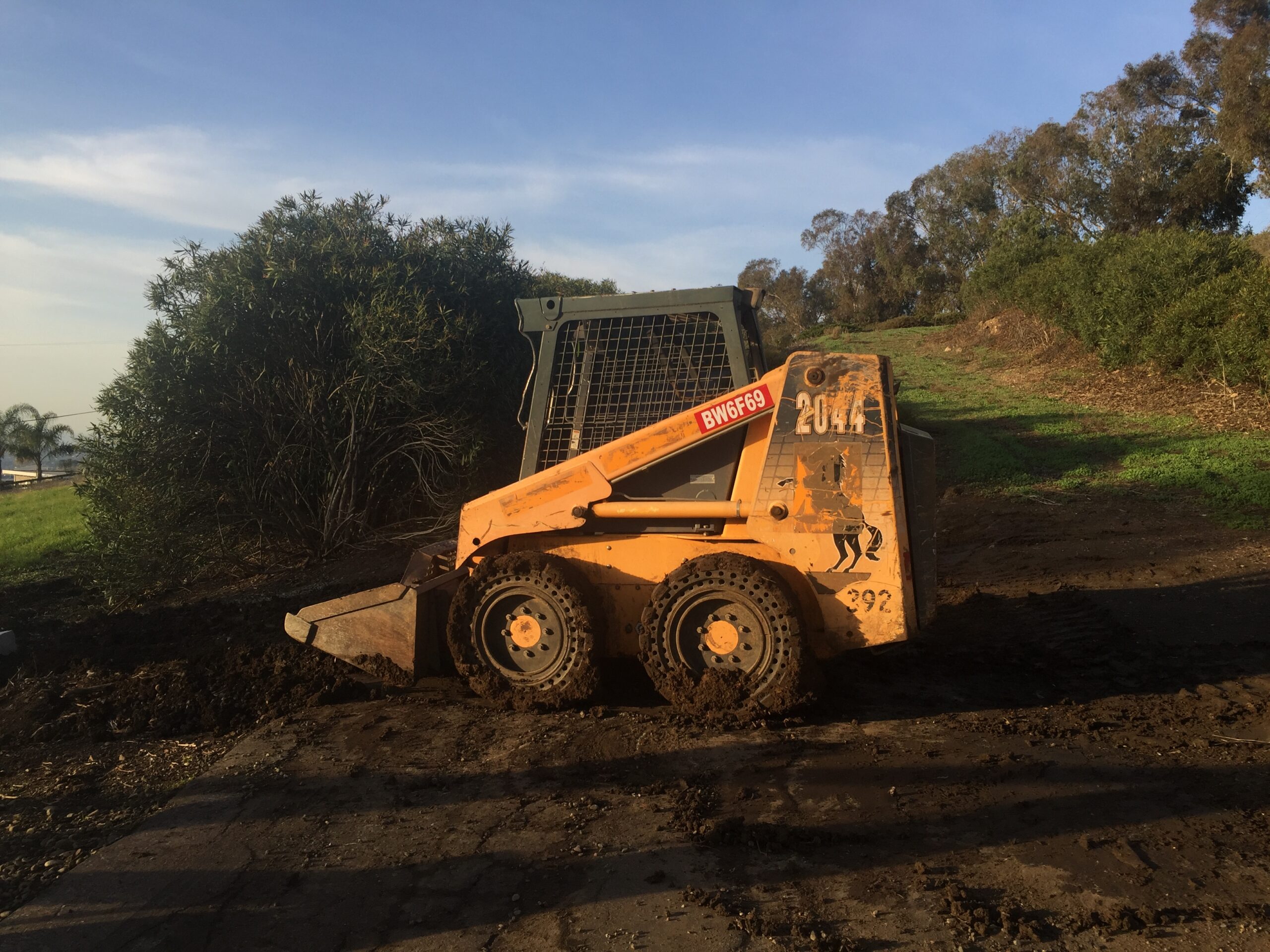 After spending over two months now detailing all the work that was put in to rebuilding our large retaining wall a few remaining items are worth mentioning.

The work would not have been possible or as easy if we had not located on Craigslist a small skid steer  that met our needs both in terms of use and budget.  We named it Giggles as it looks like a giant baby toy and I can just imagine a huge giant grasping it and running it back and forth all the while giggling maniacally.   It has become our go to vehicle for a lot of work around here as its ability to life and carry things is wonderful–so much so that we have purchased strap on treads for it during the muddy season as well as lift forks that can be used instead of the bucket.

As part of the deal to buy Giggles we also picked up a small compactor.  Between the two of them we were able to move and mush a lot of dirt–not to mention getting the trench floor nice and level.  Plus since we now own the compactor we’ve found many other uses for it. One temporary item we had on site was a “facility” for the workers to use.  Since a few other projects were going on at the same time as the wall (such as the dry rot repair on the exterior of the great room and studio building plus the perimeter fencing work) everyone could make use of it, but I must admit I did not do so. Another extra note: the engineers responsible for “designing” the wall miscalculated and we ended up with extra blocks.  Two of them were used to shore up the access ramp we created down from the driveway into the west pastures. And the rest, including two half-blocks, are out behind the garage as we are sure to find a use for them soon enough. Agent Smith then spent some time using the excavator before we had it picked up.  He used it to move some of the rubble and flatten out the fresh dirt at the south west corner of the wall.  It convinced us that sometime soon we would want to buy our own similar unit so that we would be able to do other, (granted smaller) projects on our own timeline and power. Lastly, with all the trucks (almost two dozen 18 wheelers, the port-a-potty service truck, 7 dumbstruck loads full of rocks and three or four trucks bringing up and taking away 30 cu yd dumpsters,) we only had one “accident.”  And of course it was the very last thing to happen. When the United driver came up to pick up the excavator, the driver crushed the christie box that contained the irrigation valves for the north west garden area.   Not only did it create a mess, I couldn’t remember where the shut off from the house to those valves was located so I had to go up to the well tank to shut off the main line–as at that time I couldn’t reach the main cutoff out behind the garage.  Still the driver’s insurance wrote us a check for the damage which will cover the cost of sorting out that area’s watering needs in the future. So there you have it, the end of the great wall of Purgatory saga.  It really was an ordeal but we made it through and now we have a proper wall.  It was time to move on to the next disaster.