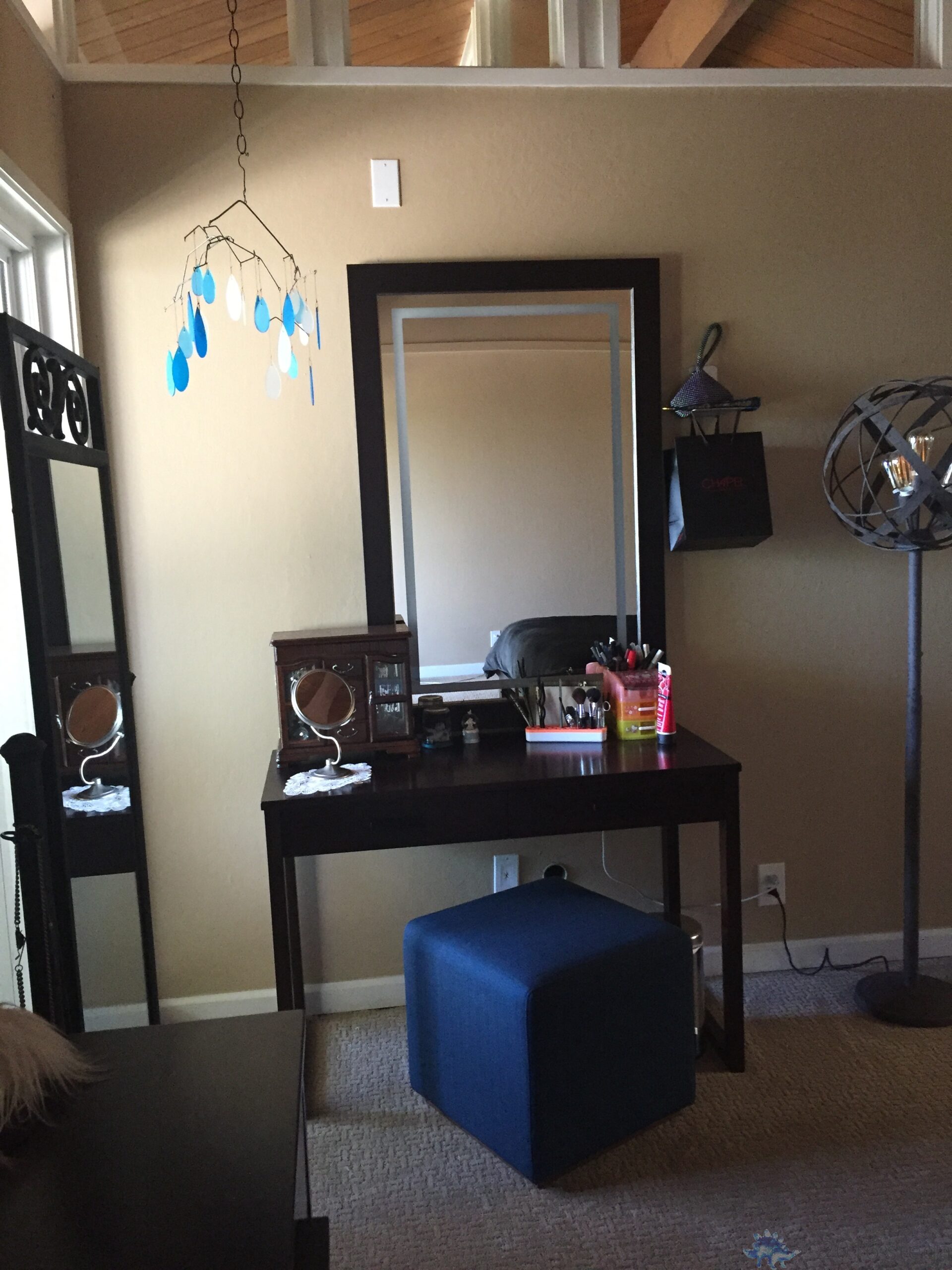 As mentioned in the earlier post, we didn’t have much furniture when we moved in at Purgatory and we have been very slow at buying new things.  The one exception to this was that just after we closed and took possession of the house, we purchased a dresser and two nightstands/end tables to match our platform bed.  We had bought the bed right after moving in to the house in San Francisco from Gingko Furniture, so we went back to them to find pieces that would match it.  A few weeks after moving in, the new stuff arrived and we’ve been happy with our choices.

Fast forward to this spring and we decided to add another piece of furniture:  something rather girly.  That’s right, a dressing table/desk.  So it was back to Gingko only they didn’t have anything that would do the job in their catalog, but we sat down with the guy at their Mountain View store and designed something that would work for us.  10 weeks later it and a little seat were delivered and we hung a lighted mirror to match it that we had purchased off Amazon.  As an added bonus, the mirror covers the holes left from the previous owners flat screen TV that once hung on that wall.

Side note:  The table and floor lamps we got at Lamps Plus.

A few weeks after that we went to Fanime and Clockwork Alchemy where we purchased some things to hang on the walls.  The end result is big improvement.

Here’s a shot of the scrolls we bought from Stephanie Kao.  They are hung above our bed.

Then while at Clockwork Alchemy I found some punny prints to brighten up the closet area.  It’s a bit hard to tell, but the one on the left is a box turtle, the middle is a tree frog and the right hand print is of some snap dragons.  The artist is Llyn Hunter (5/21 edit: and their website is currently defunct.)

They really do make the space a lot nicer as you can in from this before shot.

As for the last bit of decor in the room: after the dresser and nightstand arrived we hung up a painting purchased after our first trip to Australia together.  We visited Mannum (a small town on the Murray River) and there is a curated gallery called The Wool Shed  which has quite a lot of interesting artworks by Australian artists and Aboriginal artists.   This was back in 2009 and the artist (Gloria Petyarre) had yet to become all the rage so who knows if it’s worth more or less than what was paid.  We like it because it’s a great painting.

As you can see it’s not the traditional sort of Aboriginal painting, as she and other painters in her community have branched out from the dot painting motifs.  The title is Thorny Devil Lizard and images of other works by her can be found here.

At some point we will paint the bedroom something other than the yellowy-brown it is now, but at least we have the holes covered and things to our liking.