Because our water comes from a hole in the ground, it is very hard.  Specifically our calcium hardness rating on the regular pool water tests puts us at 575 ppm.  While the water coming directly out of the well tastes just fine, that amount of calcium is bad for the plumbing and it makes soaps and shampoos far less sudsy and thus less effective, so we have to soften the water.

Now when we purchased the house the existing water softener unit had been installed sometime in the mid 1980s.  As you can see in the pic below, it was not the most technologically advanced system by today’s standards.  The tank on the left was the salt tank and the two cylinders on the right were where the actual molecular replacement stuff happened.  For those unfamiliar with how water softening works, the smaller tanks are filled with resin, aka polystyrene beads. Pushing salt water through the small tanks causes positive sodium bits to bond to the negative beads.  Then as our virginal well water flows through the resin, the sodium swaps places with calcium since calcium has a bigger charge. (Salt or potassium systems are the two major varieties of water softeners.)

The salt tank is needed because eventually, calcium replaces all of the sodium in the resin and the water isn’t being treated.  You can see a weird dial-like thing on top of the left resin tank.  That was a mechanical flow based setup to control the resin recharges .  After a certain amount of water passed through the resin tanks, a nice brine solution would be washed through them to recharge the resin. This causes the calcium in the resin to give way, and be recharged with sodium. After regeneration, the unit flushes the remaining brine, plus all of the calcium down the drain. In our case that means out to our septic tank.  With the old setup measuring usage and accurately tracking when recharging occurred was not possible. Here’s a shot of the plumbing for all of this.  The pipe on the left is the incoming water and the blue thing hanging there was a sediment filter.  One thing to note is that the green handle that looks like it is a shut off valve in this pic was NOT one.  The poor guys who came out to do the install thought they had turned off the water and started dismantling things only to find themselves causing a small flood and we had to go out behind the garage to the main cut off to stop the flow.  (And that iron was just one of the very random things left in the house by the POs.)

So as mentioned in the previous water post, there was a lot of sediment in the well tank–mainly rust since the old tank was made of steel.  Here’s a picture of what spilled out of the old tank.

The sediment filter as a result of that and the POs not doing any preventative maintenance, was, well…very used.  In addition there was actually mold growing in the salt tank. 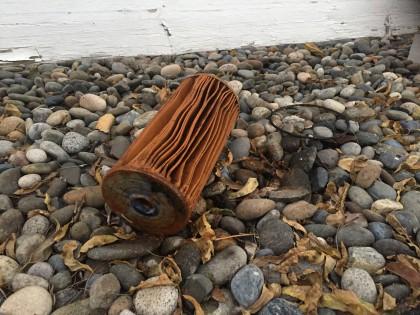 This was all back in August, and since then we’ve enjoyed our nice new water softener. With two sediment filters, an LCD display/control (this one monitors itself and tells us what it’s doing.)  We also have a proper shut off valve (you can see it just to the left of the sediment filters.)

The new setup means we can shower, wash dishes and clothes, etc effectively, but it also means our water coming out of the taps tastes a bit salty.  Not sore-throat so gargle with salt water salty, but more as if you spilled a bit of salt accidentally into your water glass when you shoot the shaker on to your food.