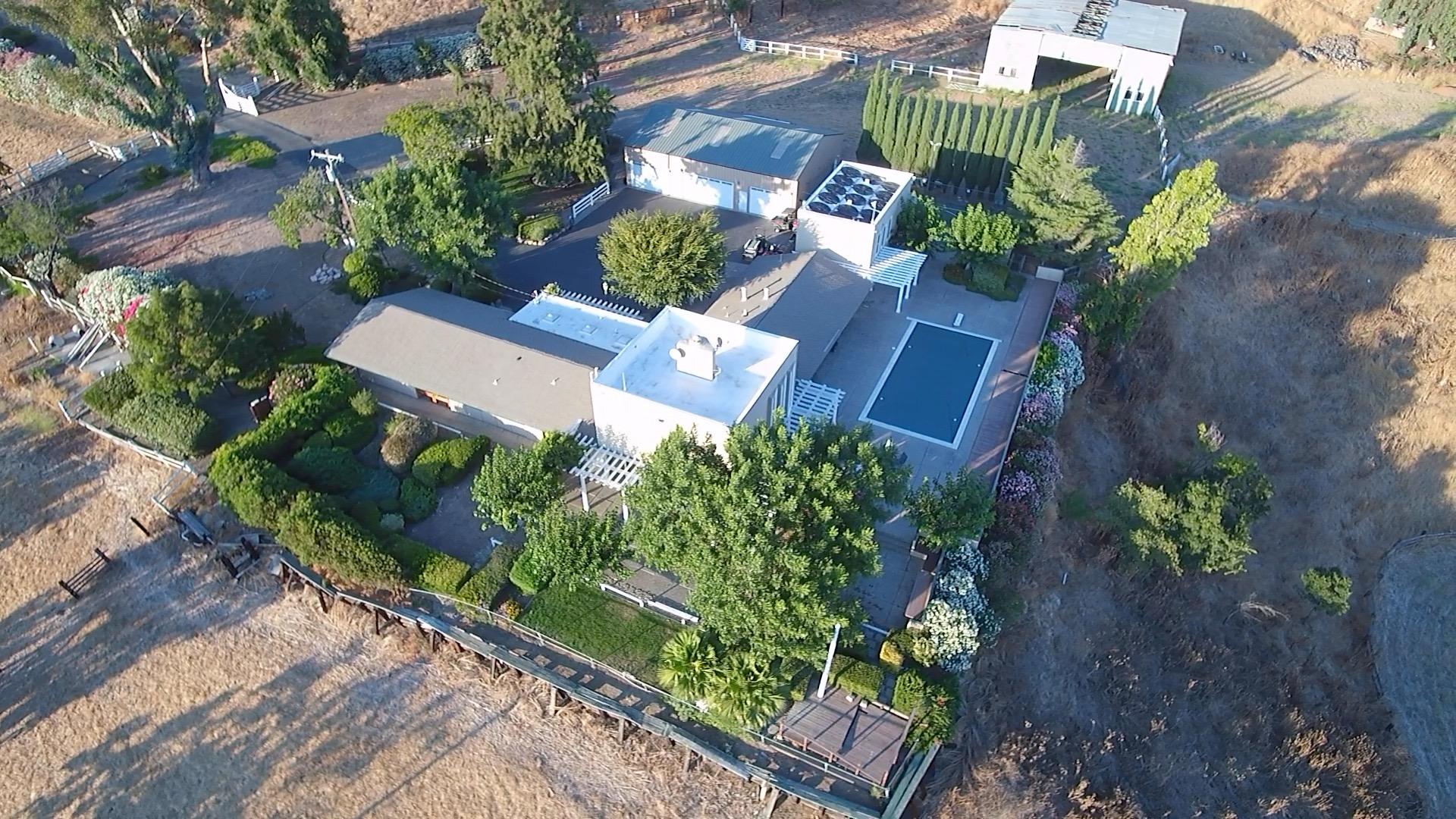 As part of the purchase of Purgatory, we got any drawings/plans pertaining to the house.  Right after taking possession, I went through bundle and learned that it had been built for doctor and his family in 1966.

I researched the architects and found out quite a bit.  I also tried to find out if any of the children of the original owner might still be alive, but failed to turn up anything.  Then two weeks ago I picked up the trail again and started out by trying to find out more about the doctor listed on the plans.  After about twenty minutes of web searching, I discovered that he might actually still be alive and still practicing medicine.  So, one morning I screwed up my courage and called one of the numbers listed for him.  I explained to the receptionist the very odd reason for my call and she patched me through to him!

I spoke briefly to him and explained why I was calling and gave him my number.  I crossed my fingers hoping I’d hear from the Doc again and a week ago this past Saturday I was delighted to get a call.  We arranged for him to come up that afternoon and what a visit it was.

He did indeed build the house in 1966 for his family and originally the roads up here were all dirt and he owned most of the hillside as the parcel, before it was subdivided, was well over 200 acres. With a large Caterpillar diesel earth mover (not sure what model) he eventually cut the road that goes past our place and further up the hill as well as the road that runs south of our property he also leveled the foundation pads for most of the houses now on the hill and he created the rodeo ring. Sadly for him, he had to sell the place due to a divorce settlement in the early 80s and the PO’s father purchased it. He moved to the last lot up the road at that time, but then left the area completely some time ago.

Our home was the first built up here and he was very proud of it, as he should be.  For those that keep up with this little blog know, we really like the layout, construction, and original details, but the POs didn’t take care of things incredibly well.  Still getting things back up to snuff isn’t as hard as it would be if things had been poorly put together originally.

So some great details I learned:

1) The dog kennel was because they raised Dobermans, and originally the kitchen was much smaller (there was no eating space) and that area was a mud room directly off the original garage.  There was a drain in the floor and the dogs also used that space.  The sliding glass door in the kitchen is an addition of the POs.

2) The large garage was originally a school building (think gymnasium) that was being demolished and Doc bought the structure.  There were four identical sections and he sold off three and used the proceeds to get the foundation and other details done.  He was happy when I told him we do indeed use the pit as that was his doing as well.

3) He was very proud of the five lights large street lights that ring the driveway courtyard.  They do indeed make the entry area special: bronze and copper lights that were originally installed in Pasadena, CA.  The POs said they were on Colorado but Doc said they are from Orange Grove Boulevard (which is where the parade floats assemble prior to the Rose Bowl Parade.)

4) The large barn (the one we’ve decided to clean out and keep) was built so they could breed Morgans.  Constructed with telephone poles and rail road ties, the two large beams that run the length of are it from an old building down off Brokaw that was being demolished. Doc got a deal on the railroad ties that also make up most of our fence posts.  He said he paid $1 a tie and bought 900 of them, and while the horses were originally a way to help defray taxes (California has an ag tax break if you use the land for livestock and/or farming,) his daughter rode competitively and hence the ribbons in the tack room.

5) The crooked flag pole/light has always been crooked. (Yeah!  We can stop worrying about it falling over.)  Haven’t mentioned this before but off the rickety observation deck there’s a pole cemented in the ground and it lists.

6) He also said that the house fence (the one AS and his dad have been working on all week) is a mile in length.  I guess walking the fence line could be a good winter workout when its too cold to swim.

7) The well and tank are new since he owned the house, and he suggested I do some digging as the original spring located up the hill that did provide water to the house (not sure where it’s located) is deeded somehow to this property.  At some point this winter I may make a journey up to the SCC records office.

8)  The pool was originally only supposed to be 20′ x 40′ but the diggers messed up so it’s a big bigger.  No complaints there.  I guess the crew doing the digging wanted to charge Doc extra to which he replied, “Just fill the extra bit in.”

9) Two weddings were held here at the house.  I’m pretty sure they were relatives or even his kids.  But he pointed on the spot outside of the great room as focal to said weddings and explained that area is all fill, hence the slowly failing retaining wall (also made with railroad ties almost 50 years ago) that we will eventually have to address.

10) He seemed to like the fact that I had some of the original drawings framed and hanging in the foyer and great room. Here’s a shot of the watercolor southwest elevation in its frame.  He explained that the first concept of the crazy staircase up around the chimney was during the design period when they were “trying ideas out”.

11) He also explained that the original design of the extra bathrooms by the linen area was intended so none of his three kids could monopolize the bathroom.  There were two toilets on each end of the hall and then a shower room and a bath room between them.  Quite a smart idea especially back in an era with whole sitcoms like the “Brady Bunch” structured around the tension of having only one bathroom for multiple teenagers.  We’re pretty certain that the original center pocket doors are actually sealed up in the walls.

Here’s a scan of the original floor plan:

And here is one from somewhere between 1983 and 1988 (as that is when the garage was converted into living space.)

12) The “Planters” called out in the original floorpans for the foyer were actual built in units that the POs at some point did away with.  They were probably showing their age, but the POs didn’t seem to be keen gardeners as I don’t remember seeing any house plants. When we looked at the house they had absolutely nothing in the foyer space and just a giant mirror on the wall and a kind of freak family portrait. (There were mirrors EVERYWHERE in the house, but thankfully they took all that weren’t a closet door or part of a bathroom with them.  And as long as I’m kvetching, they had every surface of the house covered in framed pictures of themselves….well mainly of the wife and kid. Think I’m exaggerating? Here’s a pic from the original listing. Those black cabinets had just framed photos inside them. The fireplace mantles were completely covered in family photos and a section of the studio was filled with just large unhung framed photos of the them.  There was a really freaky large photo of the wife in a cowboy hat in that pose where you lean up agains a barn/fence, bend one leg so that your foot is resting on the barn/fence, dip your head down and have a bit of straw in your mouth.)

But I digress…back to the foyer.  This is what it looks like now.  Complete with real live plants and a framed drawing of the house from the original bundle.

And here is the other side of the space.  (Oh and one other kvetching moment:  who puts down a slate floor and then doesn’t seal it? Yep, you guessed it, the POs. I bought some sealer earlier this week and the floor is now waterproof.  Yeah! I am on the fence on whether or not I will seal the wine closet as of course they didn’t seal that either.)  Side note: the red glowing thing is a fun giant apple light we bought years ago.  It sits atop a table my father made before I was born that is responsible for the scar above my left eye.

13) The room that is my office was never actually two separate rooms and the POs really did little to it other than putting down carpet.  (The way they told the story they had made it into a family room by removing the central wall.) Yes, there was a wall, but it was moveable as the space was shared by Doc’s two boys.  Plus the lovely windows that currently look out on bare dirt because the POs were stupid enough to not pump their septic tank after they built a deck over it, have always been here.

14) The master bedroom originally had a fireplace.  The POs pulled it out, but we don’t know why.  This means there is most likely a concrete pad still in that section of our bedroom.  They put a patch in to cover where the chimney once was.

15) The existing arbor (the one that is rotting away) is not original to the house after all.  When the house was built a structure that came out further from the walls had some sort of shade setup that could be raised/lower to shield the room from the sun.  The POs at some point got rid of that and put in the arbor and giant blinds.  Of course one of said blinds was broken and they failed to mention it.  And of course the blinds are too old for 3Day Blinds to be able to fix.  The POs did at least take their rather yucky window flounces with them.  That of course meant, like every other room in the house, we have holes to patch up, staples to remove and eventually, full on painting to be done.  Keep in mind the POs took all their “window treatments” with them and they had a TV in EVERY room, so that’s a lot of holes to patch. (Although there was a TV in just one of the four bathrooms…)

16) The Mulberry trees were not part of the original landscaping but were added by the POs.  The walnut trees and fig tree however predate the POs.

I learned quite a bit about the house and surrounding property in the brief ninety minutes Doc was here, and the biggest take away was what an craptastic job the previous owners did of taking care of the place.  While we have made a lot of headway towards righting all the wrongs, we still have a long way to go.