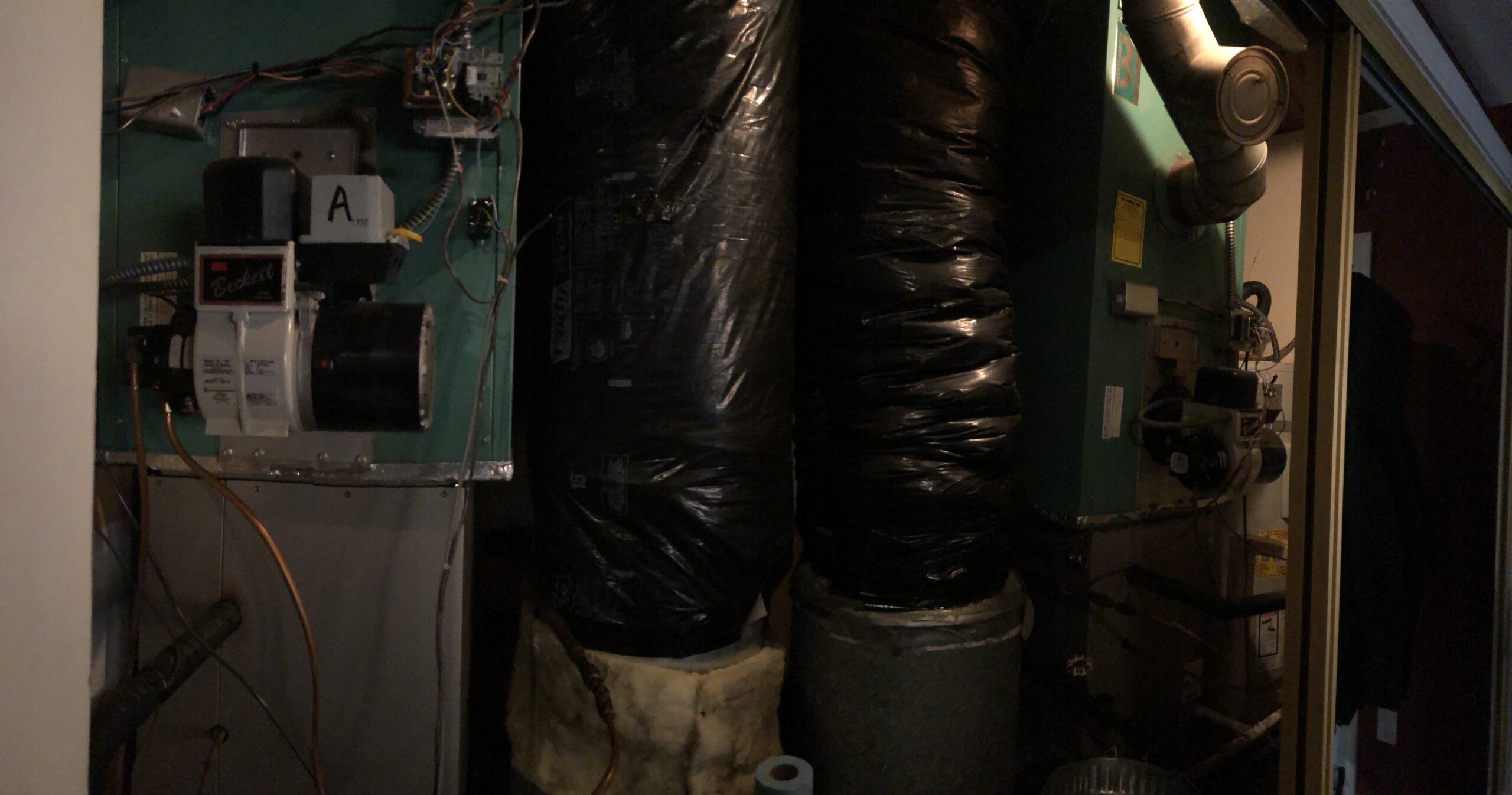 Back in May of 2018 we started the very large project of decommissioning our twin diesel furnaces. It seemed like the time to do it as even though we had nursed our furnaces through two winters plus cleaned and repaired the duct work as well as replaced the return vents with ones that could fit filters as there was no filtration in place originally, we weren’t especially happy with the hot smell of burning dust and debris ever time the giant engines roared, and I mean roared, into action.

I thought I had a video of what it was like when one of them would fire up, but haven’t been able to find it. Here are some pics instead.

The furnaces were big old Becketts — manufactured in Ohio and original to the house. Amusingly enough the same brand once sat in the garage/utility area of one of my grandparents’ houses when I was growing up and it also was big, green and loud.

The two units worked independently of one another: one handled the north end of the house but not the foyer or great room, while the other handled the south end including the great room and foyer. While the thermostat for the north end was located in a logical location (the north hallway,) the thermostat for the south side was on a wall in the great room. Considering the great room is a giant box measuring 26′ x 26′ x 24′, heating it is not really possible even with 8 vents and two returns in it. Plus since two sides of the space are glass, it tends to heat up quite well during the day just from all the sun exposure.

For two winters we experimented with closing the doors between the great room and kitchen if and when we wanted to heat that side of the house. We soon learned it’s rarely necessary as the windows in the kitchen all face south and even on the coldest and cloudiest days enough sunlight is available to warm up the space nicely. Plus the bleed from running the furnace for the north side of the house was more than enough to keep Agent Smith’s office pretty snug in cold weather. This is because the furnaces sat in a very large closet within in office. Every time the furnaces fired up the sliding mirrored doors that closed off that closet would wobble noisy about, so we did invest in some simple felted sealing tape which stopped that issue and helped keep the diesel smell almost at bay.

In 2016 we also invested in moving the thermostat for the south furnace. We had a random furnace person do the work based on the advice of the last diesel furnace specialist who was very expensive else I would have had him come back out and handle it, as that would have much smoother and NOT required a return visit because he would have known exactly what to do. But that’s part of home ownership: learning what sort of contractors not to use is even more important than finding the great ones. Anyway, we put the furnace remote in the laundry area.

Back in the 90s the POs had whole house AC installed and to do so, they jacked up the furnace air exchangers and slammed in some condenser units underneath them. This meant there was absolutely no room for air filters. Zilch. Zip. Nada. So, not only did we have 50 year old duct work that the POs never bothered to clean (see image below) but we also had no way even try to filter out any crap so that the furnaces didn’t just keep blowing dust and debris through the house again and again.

I’m pretty sure this conundrum is why, when we moved in, we discovered the thermostats were set to only fire the furnaces up for a few hours in the mornings and evenings and then only to heat things up to about 62 degrees Fahrenheit. I guess instead of spending a bit of money on being warm they were content to be cold and not breathing dust.

In 2016 we also invested in new return vents: ones that could hold filters. You’ll notice that the POs just painted the old vents when they had the walls painted. They didn’t even bother to remove them from the walls and just slopped paint over them.

But long story short: the first two winters we were here the boys had respiratory issues, and the smell of diesel permeating Agent Smith’s office (which was originally the garage and in the mid 80s was converted into a furnished space) was very pungent. So we did some online research and I made a few calls and in May of 2018 we got to work.