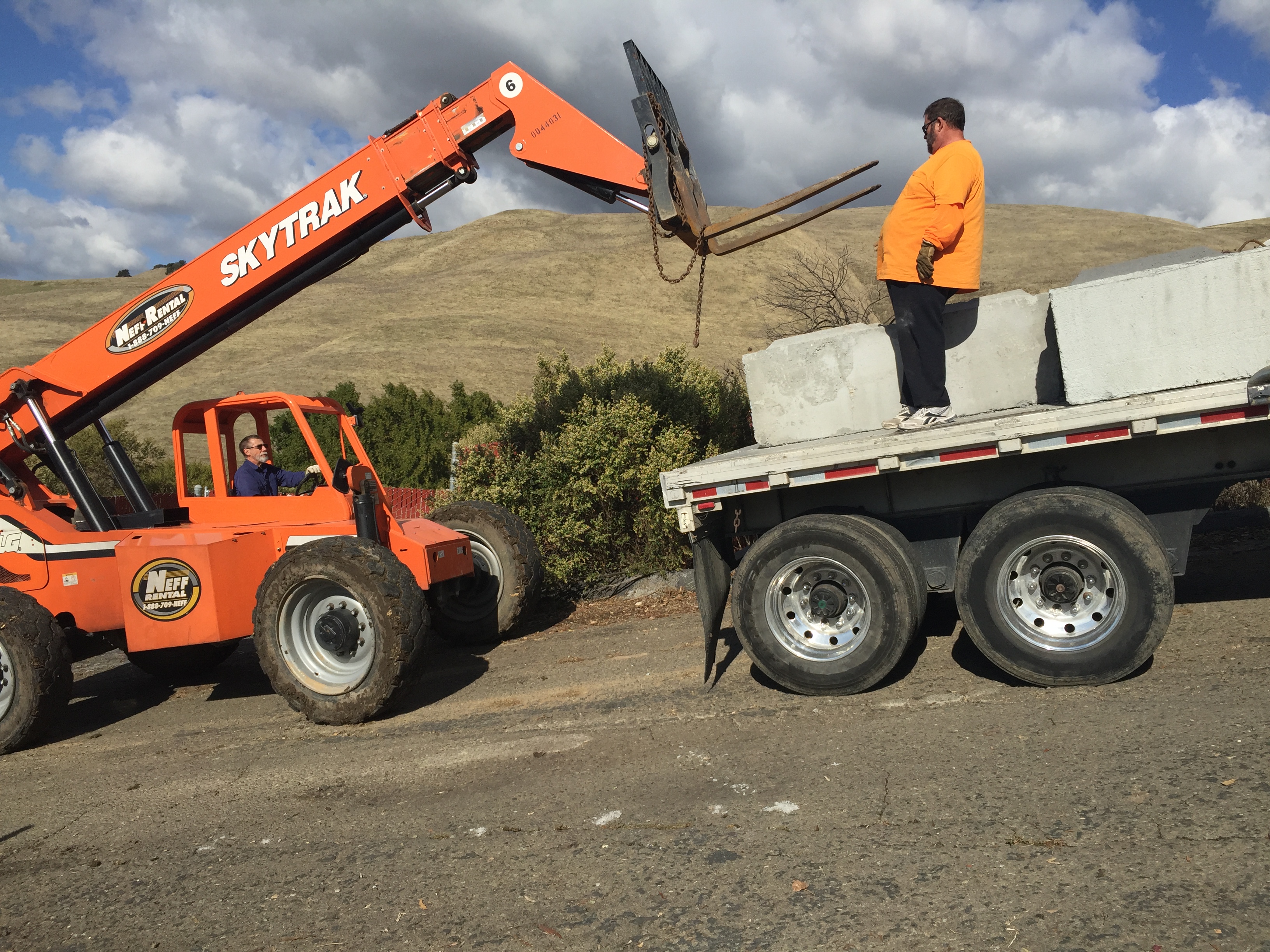 To rebuild the wall we ended up purchasing large 6’x6’x2′ blocks from Granite Rock–which, along with United Rentals and All American Rentals, was one of the great companies we worked and lessened some of the pain caused by engineering firm we had do the design and provided labor–which is totally separate from the awesome Geotech firm who provided data and guidance for the endeavor.  To be honest the work crew from the general contractors we used were great, just the company’s project management skills were severely lacking.  To sum it up, we started the discussions and initial design work in the spring of 2016 and Agent Smith’s father was booked to fly out from Australia on September 21st to handle the excavator.  We had a one month window that we were assured was do-able to get the work done, but then the September rolled around and we still did not have engineered plans.  The lead engineer visited our work site once and spent most of his time taking cell phone pics of the view instead of reviewing the scope.  Then when we got initial plans back they included plans for building the wall out of tiny little keystone blocks.  You know the type–the eight or twelve inch wide ones you might use to make a wall with some flower beds behind it.  Then there were delays as the engineer sorted out what it would mean using these gargantuan blocks even though we had expressly stated a year earlier when first discussing the project and at every subsequent meeting that we wanted to use the beefy concrete blocks such as this one.

Such blocks are made by concrete plants and rockeries when cement trucks return and still have usable (wet) contents.  The remainder is pored into forms with some rebar added for structural support.  They then cure and are ready for use for all sorts of things.  Since the forms can be just about any shape or size, companies can then make money off the backend of a project requiring a truck to pump and pour concrete, as they can then sell off blocks easily for things like retaining walls, freeway barriers, ballast and the like.

It was these blocks we used for the wall, but getting them here was not an easy task.  Since Purgatory is halfway up a mountain, the 18 wheelers carrying the blocks could only bring twelve to fourteen at a time.  On the first day, one of the truckers not only blew past our driveway and continued another 800 feet in elevation up the mountain only to have to back himself down, he then managed to lock his maxi brakes and couldn’t get them to release so that he could bring in the blocks.

Enter our trusty Australian heavy equipment driver and the telehandler.  He managed to unload about most of the load–thankfuly none of our neighbors got upset about a bunch of big blocks sitting on the side of the road for a day.

Once most of the blocks were off the semi, the driver carefully crawled underneath to release some of the pressure and unstick himself.  Meanwhile our operator got busy ferrying a few blocks down the ore quarter mile driveway.  Sadly shortly after this eventful day our operator flew back home, but seeing as he had already extended his time working for us by almost a month due to the general contractor’s inability to project management, I’d say we got our money’s worth out of him.

One side note to this little story, it was at this time I started contacting Google and Apple to report in that their maps were in error.  Our property actually has two addresses.  Per the county we’re off the “low”road and while technically you can reach the house from there, you need to either be a goat or be in a four wheel drive vehicle as the old dirt road up through the south pasture is not for the faint of heart.  Our postal address is off the high road, but GPS units that rely on mapping data had our postal address located about a quarter mile past our driveway which means trucks such as these were prone to miss our turnoff.  During the wall project we combatted this with a plywood sign with our house number in bright orange.  We’ve since replaced that with a very pretty metal sign that has our house number along with those of our nearest neighbors.  In addition a few months ago I finally got confirmation from both Google and Apple that they had correct their mapping data and both our county address and postal address resolve to the correct location. So….progress!