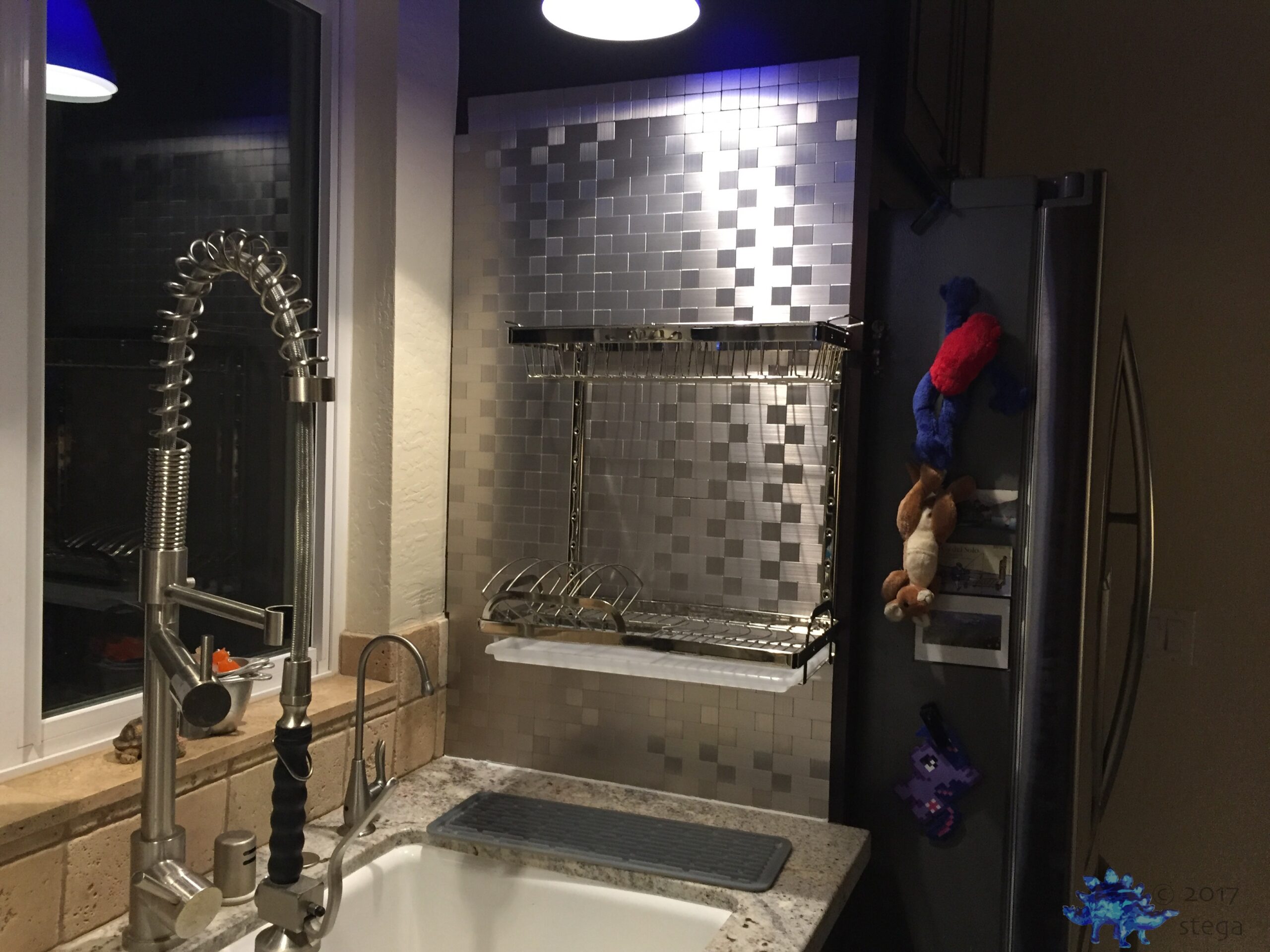 A few months after we moved in I posted about our kitchen sink.  We have limited space oto the right and so we purchased a small dish rack to make the best use of it.

The rack worked well enough but I decided I really wanted to make even better use of the space, so back to Amazon.com I went and I found a rack I could hang from the wall.

It arrived straight from the a factory in China. Packing of such items always involves so much tape and plastic–still it assembled easily and was exactly what I saw in the product listing, so no complaints.   The typos in the little manual were amusing–you can see one such in the below image.

Installation was straightforward enough.  Here are the before/afters. So all that was done back in October of last year and while the new rack worked even better than the first, I still was not happy with the space.  I started poking around on Amazon and found the most wonderful thing:  sticky tile.  This is small sheets of tile you can attach to wall with minimal fuss.  No grout necessary and the tile can be cut and if you muck it up, you can fix your mistakes with out too much effort.

Complicating the tile install though was the garbage disposal switch which you can see in the above before/after pics.  Now the run for the kitchen sink drain pipe out to our septic tank is about 80 feet with multiple 90 degree turns because the crazy plumber who put the drains in back in 1967 thought it was a great idea to have it work that way.  The result is this.

The above is our house floor plan and the green line are approximations of where the drain lines lie under the house.  It is not a pretty picture. Here’s our large compost unit when it was relatively new and in the front courtyard.

But I digress, back to that garbage disposal.  After some discussions we decided to remove it.  So when our new water heater cooked itself (more on that in an upcoming post) I had electricians in to diagnose things and while they were here, I had them disconnect the disposal switch.

And when I had plumbers here to scope our crazy drain pipes to assess their condition, I had them remove the disposal.

Then I sealed the seam between the wall and counter, cleaned the wall, Agent Smith cut a small piece of wood to seal up the hole left from the outlet and then I put up the tile.

Here are some shots of the last bit of the work.

We’re quite happy with the setup as it makes the best use of the limited space.