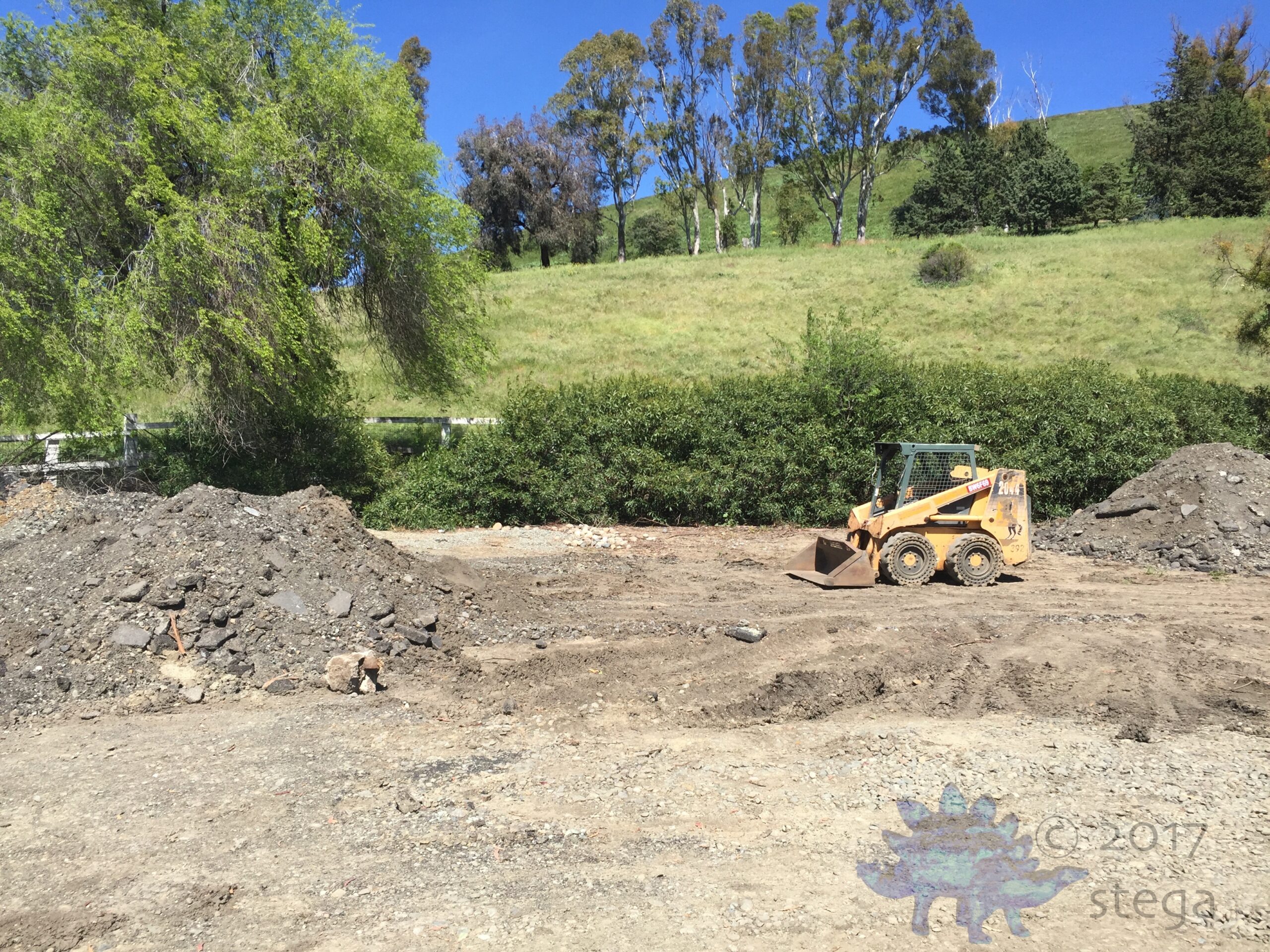 Yesterday was our Houseaversary: the anniversary of first discovering this house. I posted about it last year here and I remembered to post on Facebook about it, but I failed to post anything actually on Purgatory as yesterday was a long day.

I thought I had to be up in Sausalito for a class in the evening, so I spent the morning working with Agent Smith to get a bunch of stuff done: from washing cars to working on the trees I’m painting (inside the house on a couple of walls.) Around noon we headed out to do a bit of serious work with Agent Smith taking out Dino and me learning to drive Giggles–which reminded me that I need to update our About section and add in the vehicles and machinery. Sadly when I came in to get ready to head north for my class, I found out it was cancelled at the last minute, so I grabbed a big pillow, my iPhone and headphones and went back out to Giggles where I then spent several hours moving some of the spoil pile left over from the driveway repaving while catching up on “The Archers”–which I had planned to do on the 4+ hours I’d have spent driving to/from Sausalito.

The pillow is necessary because I don’t fit very well in Giggles: even with the seat as far forward as possible, skidsteers are made to fit much bigger people than me. Even with the pillow, I woke up this morning quite stiff and a bit sore, as sitting in Giggles for a few hours is like riding about in one of those rides at an amusement park that tosses you about as it spins in multiple directions–only there’s no scary ride “attendant” pulling the levers while smoking a cigarette. Still, I got about 1/4 of one of the spoil piles moved and laid out in the floor of the stables and today I should be able to get another 1/4 moved–perhaps more as we’ve decided instead of using Giggles to spread things, Tony is a better option. So that was the bulk of yesterday–our houseaversary. After playing with large machinery we came in, showered, I set about reconfiguring Agent Smith’s closet (as I did mine last weekend, but more on that later) and then we headed down the mountain for some food–sadly the place we wanted to try out said they closed at 8pm, but when we got there at twenty-till they had already packed it in, so we went to our tried and true standby: The Olive Garden where we sat side by side at the bar and did last week’s NYTimes Sunday crossword puzzle. Decent dining out is one of the few things we miss about living in San Francisco as the pickings are slim on this edge of the valley unless you want fast food, Pho or Mexican. On one hand this forces us to explore other areas like Campbell and Morgan Hill, and on the other hand it means I’ve been cooking quite a bit more than when we lived in SF–although rather simple stuff like French Onion Soup in the slow cooker. The problem with cooking for two when it’s the two of us is that Agent Smith doesn’t like anything from the sea and I don’t like most land animals.  For him it’s a question of smell and for me it’s a question of texture. Compounding this was the matter of learning to work with a glass electric stove top. Remember, everything in our house runs off electrons except for the diesel fuel that powers those jet engines–errrr…I mean our furnaces.

After some experimentation that involved more than just boiling water or scrambling eggs, we’ve adapted and I now foresee some adventures in stir fries in our future. And while we now like our glass stove top, we do need to eventually replace the oven for one that is actually capable of maintaining a constant temperature throughout. Then I can finally try my hand and some new baked goods–although our little Breville that we’ve had since we live in SF can do tiny batches of cookies, scones and muffins nicely enough. Makes me think it’s time to be brave and try out this recipe for croissants.

Perhaps this week after I finish painting the boys’ space, get the flooring and blinds installed and their new cages (hopefully) finally arrive…..oh and after the folks resurfacing our pool resolve the bottom drain issue left by the previous owners and once the spoil pile is moved, I can get a couple of dumpsters and a crew of day laborers in to clear away the last of the wall debris and start in on the last pile of garbage left behind the stables by the POs, while at the same time working with the landscape architects….then maybe I will try to….what was it? Oh, right, bake some fluffy croissants.

Thus if you’re wondering why this post reads like a giant convoluted series of run-on sentences, that kind of sums of life here at Purgatory, so the “art” is just imitating that–and if you had told me two years ago we’d own a small ranch and be doing everything we’d have done over the last two years I would have thought you were crazy, but just goes to show how much you can accomplish thanks to the Interwebs and very hardy search skills.