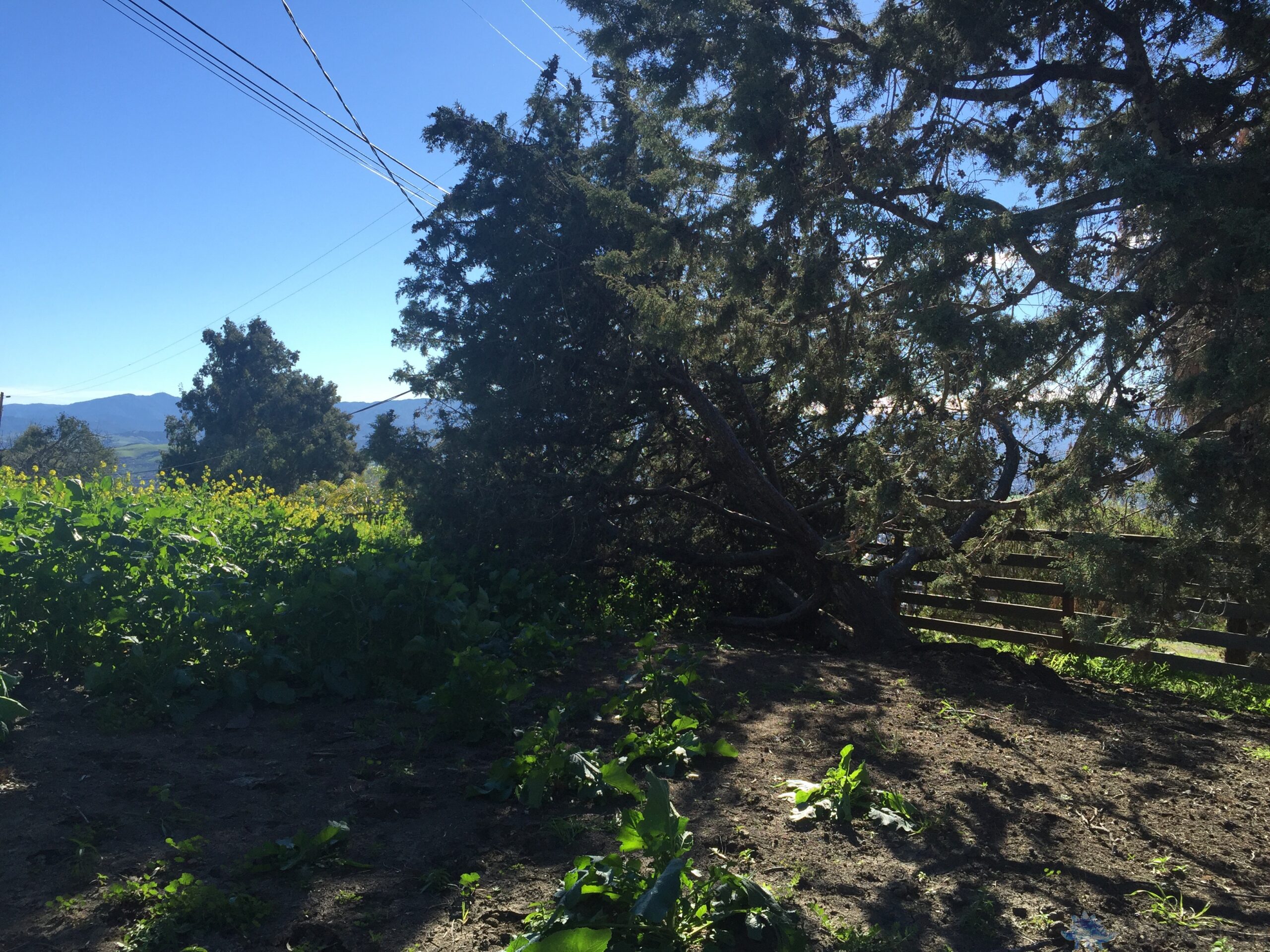 and nothing is connected to that power line….

Suffice to say there was much head scratching all around last week when a tree decided to fall over on to a power line.  This being Purgatory, that meant something weird and odd of course.

But in order to prevent as much confusion as possible, I’ll begin at the beginning.  One evening, just after I finished doing a bunch of manual labor (spreading yet more chips, filling in the hot tub trench, etc) our neighbor called to let me know that sometime in the last day or so, a tree had fallen across a power line on our property.  I put on proper attire (boots and a hat) and hopped into the 4×4 to take a look.  Sure enough, a tree was on the line.  This image, taken near dusk should give you a rough idea of the issue.

I made a somewhat quick call to PG&E to report the lazy tree during which time I couldn’t move from the spot where I had found cell signal. They said they were dispatching a tech, and I tried to explain to them (even asking them to type exactly what I said in the notes/remarks of the ticket) that the address they have for us doesn’t actually work.  This being Purgatory, we actually have two addresses as the property sits between two roads.  The lower road is considered the road we live on by the county and you can technically get to the house from the bottom gate, but only if you like treacherous steep and dusty hikes or you are a goat.  Our actual driveway and our actual postal address are off the high road.  This is the road that the Doc who built our house is responsible for (as in he had a big earth moving apparatus he liked to play with and one day, he made the road–although it probably took him longer than a day, but you get the point.)  And please don’t do what I just did and start singing “The Bonnie Banks o’ Loch Lomond”. Although my favorite arrangement of that song was in the 1944 movie _Bathing Beauty_.

But back to my story.  So I tried to explain how the tech needs to take the high road and not the low road but the rep on the phone was confused by this information.  He wasn’t nearly as confused as the poor tech who then spent about 15 minutes on the low road trying to find our address.  Eventually though he made it to us and trimmed the tree.

Now one thing that needs explaining:  the affected power line runs not between two primary poles, but between a primary pole and this little stub pole we have in the north pasture.  As you can see in the picture below, that little pole on the right comes complete with its very own smart meter and breaker box–there’s just one catch: there’s nothing attached to any of it.  The line that feeds the pole then runs on to the next primary pole only it stops upon reaching that pole–thus we a weird orphan power pole that has no purpose.

We do, however, know why it exists. Back last fall when Agent Smith and his father were fussing about in that pasture, they found a large covered pit which the Doc had scooped out and run a pipe to in order to make a rather primitive septic pit.  Thankfully nothing still remains inside the pit but there is a pipe half buried that runs from the stub pole to the pit.

What all of this weirdness actually is: the remains of a mobile home setup.  Per my conversation with the Doc, there were 3 or 4 such setups on the property when he owned it, and while we only have the one phantom electric pole, we may have a few more old septic pits to uncover.  I just hope finding them doesn’t mean some minor disaster.

The upshot of the whole mess, besides the fact that Agent Smith gets to play with Dino in order to remove the damaged tree, is that I actually hung out and chatted with both our Nearest Neighbor and our Second Nearest Neighbor.  Our Nearest Neighbor does not have a high opinion of the Previous Owners for a variety of reasons.  Namely the POs would often call the county sheriff to report any loose dogs on the property as belonging to him (even when they weren’t his); when our Nearest Neighbor replaced the fence along the property line, the POs said they’d cover half and then stiffed him; and when the POs were clearing out of this place they were of course all sweetness and light and tried to get our Nearest Neighbor to invite any one he knew to our their giant garage sale which made our Nearest Neighbor feel icky.  None of these things surprise us.