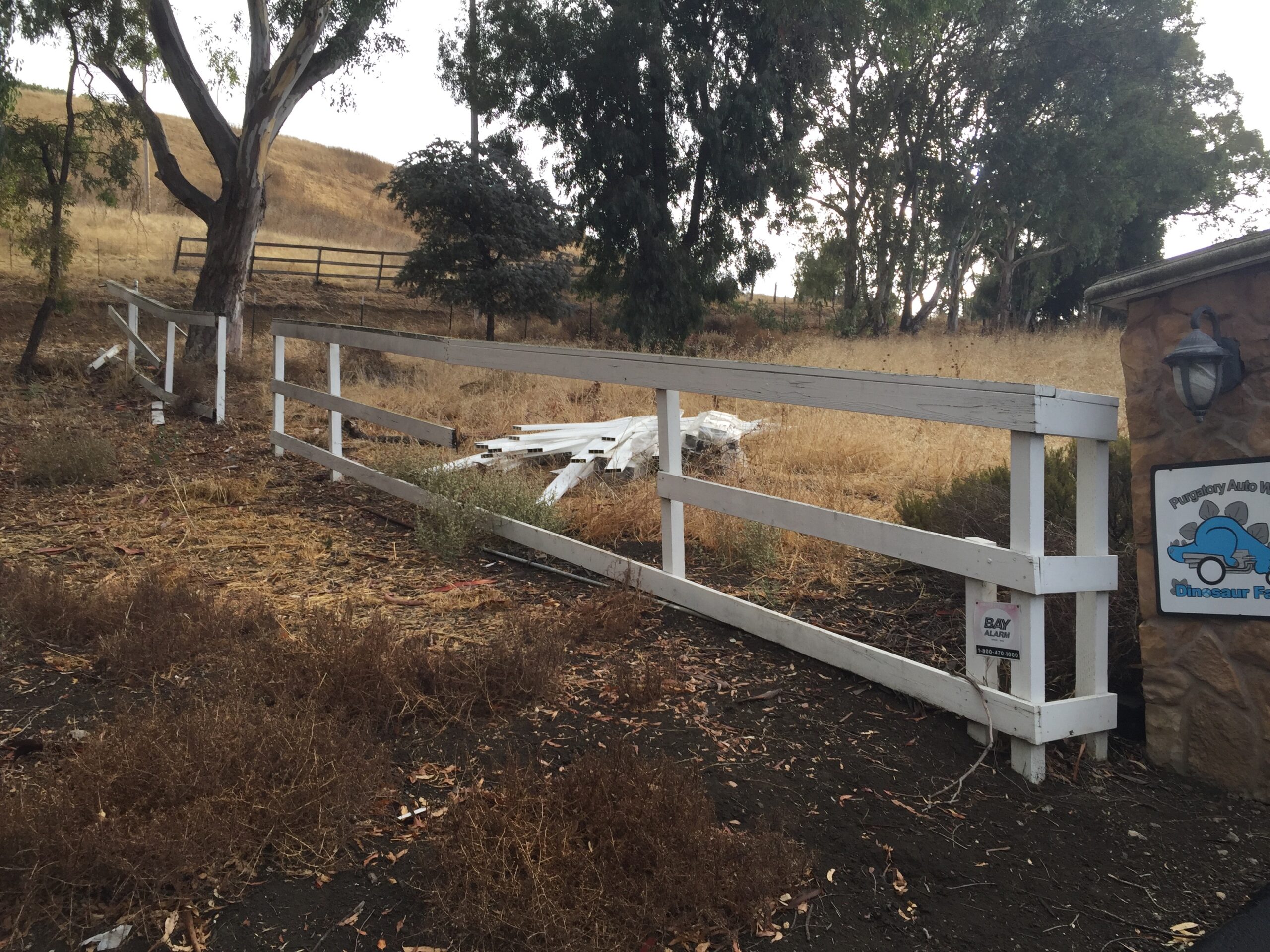 Originally the fencing out at the main gate and along part of the road that runs past Purgatory and up to the parcels past us was made of wood and painted white.  While pretty in theory, the reality of maintaining such a structure when it is surround by gum trees that like to drop their limbs right on to said fence is not easy.

In the fall of 2016 we started the long, and I mean long, process of replacing that fencing.

First we decided to do away with the section that ran up along the main road past our driveway.  We had Vlad, our friendly fence guy, pull out all the wood and simply install more wire fencing to match the perimeter fencing he’d done the year before.

Here’s a shot showing the start of the new section. That funny white box is all the remains of an old gate controller unit. And check out our spiffy sign! I designed and ordered it from BuildASign.com. It’s actually the second iteration as the first one was smaller and a bit harder to read.

Then we decided to replace the white fencing that branches out from the gate with plastic fencing.

So in November of 2017, Vlad ordered the plastic posts and rails and brought them over where they sat until he had free time to do the job.

It took a couple of months but eventually the old fence was taken down and the boards moved to the trash heap located just behind the sports court.

Most of the new fencing was then installed.

Also, make note of the sign on the goose-neck for the gate keypad in the above image. That sign helps keep random people from driving down our driveway. It also means that we have a growing collection of bits of shattered car lights.

Apparently people are very attracted to our very industrial mailboxes. So much so that when they go to use the easement (the branching section of our driveway that goes to our two nearest neighbors) they often bang up against the edge of the boxes.

Here’s a shot of the other side of the driveway and its new fencing.

It was at this point though we hit a snag. Vlad hadn’t ordered enough posts, so the section of fencing along the easement couldn’t be done. His work took him up north for a few months so it wasn’t until September of last year that he was able to finish the work.

And you can see the first iteration of the directory sign I mentioned earlier in this post. Agent smith repainted the arrows so we could adapt it for that spot.

The bonus of all this work is that Vlad also ripped out the old bit of fencing along the right side of the easement (across from the area just mentioned.) It served no real purpose and our nearest neighbor now has grand plans for refurbishing the little curb.

And as an added bonus, on his last visit Vlad pulled out that post so everything is pretty and tidy now.

Here’s a lovely final panorama of the finished area.