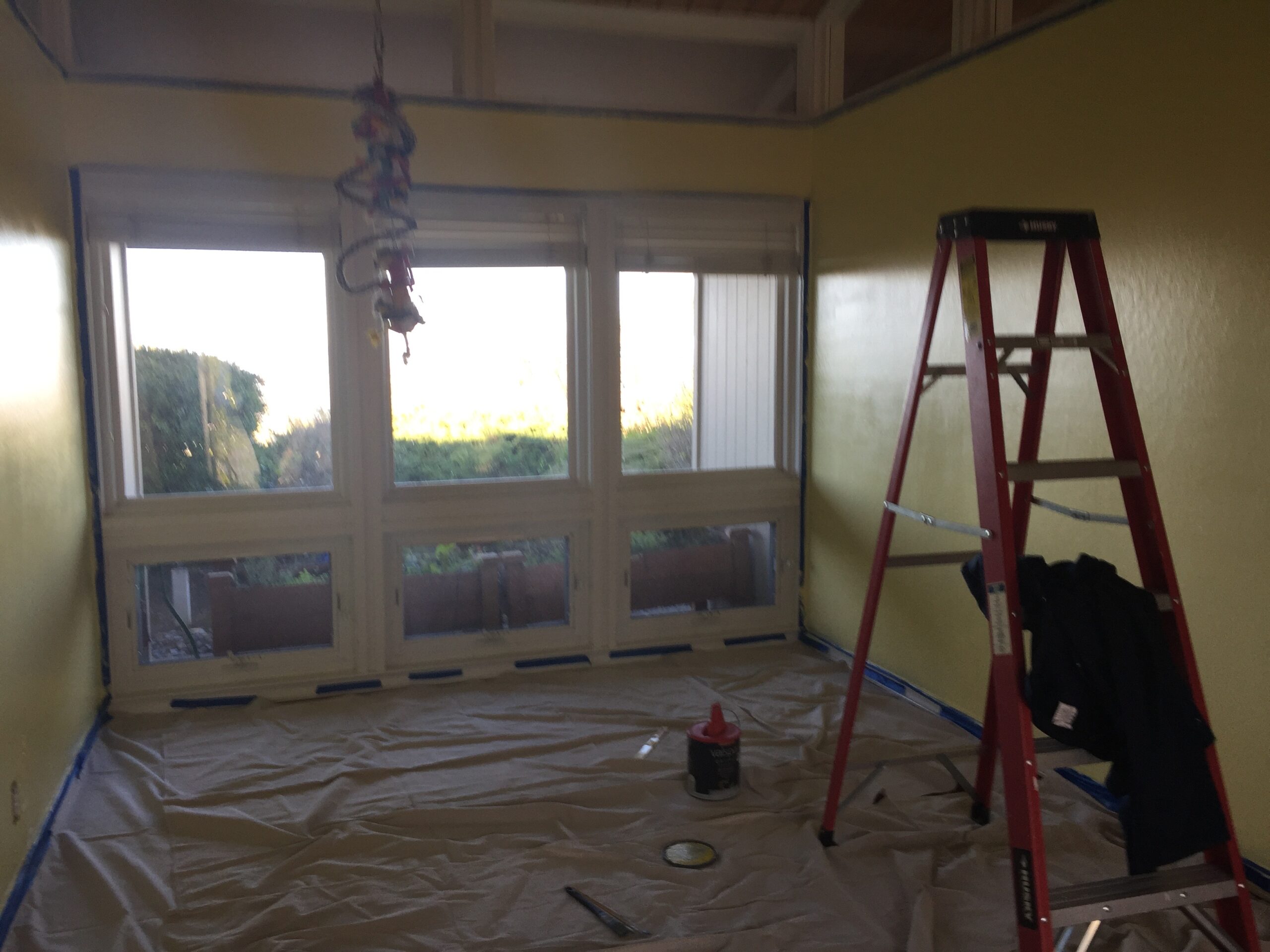 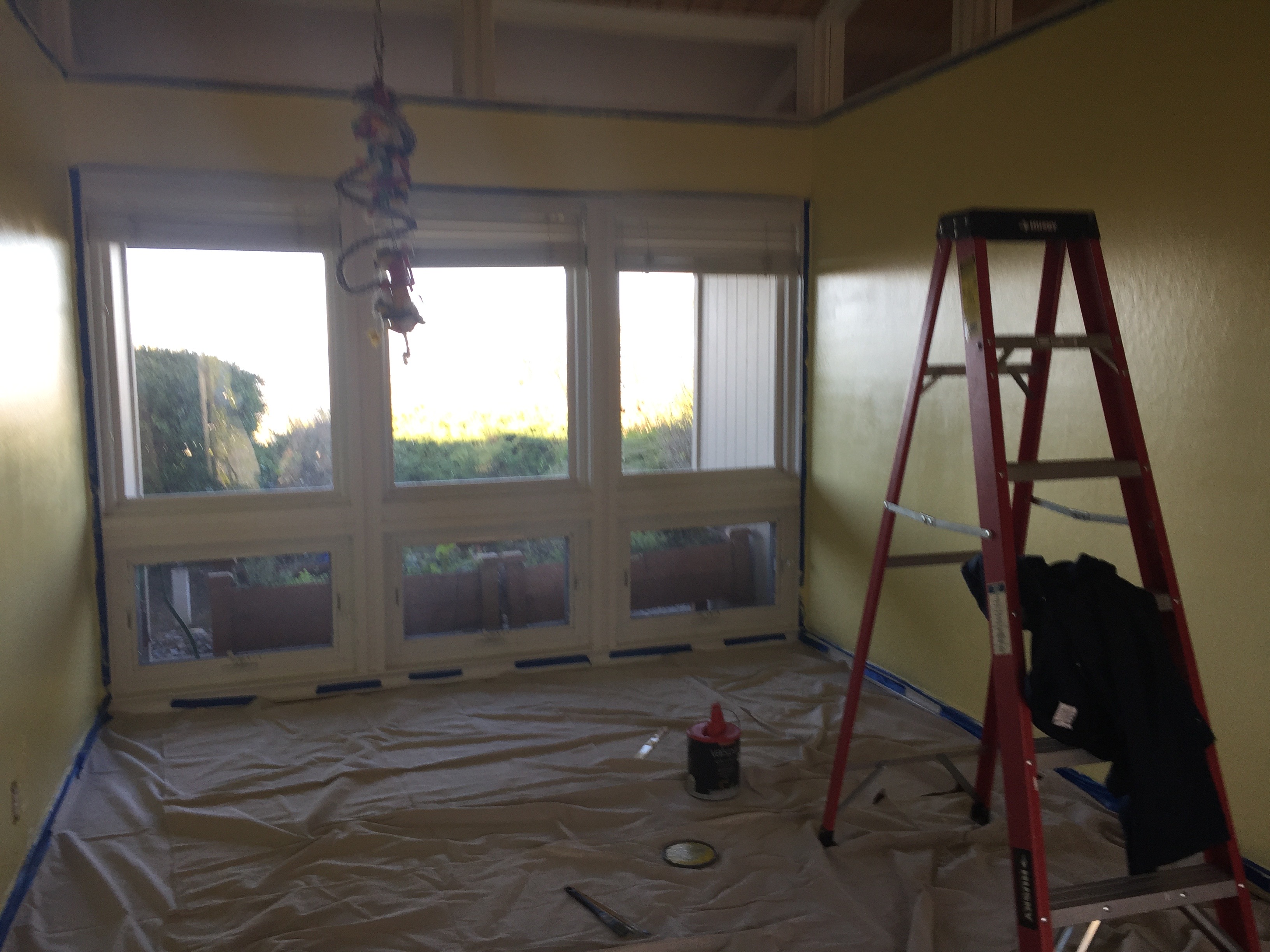 Once the trim was masked and the drop cloths laid, it was time to get rolling with the paint.  Since there were only two walls and then the areas below the transom windows, the primary color went on quickly.  Unlike the blue room which was once dark purple, I didn’t have to prime and it just took two coats to cover the pucky brown color up with a soft yet vibrant yellow.

The boys spent the better part of the month it took me to do this project in the blue room.  Keep in mind while the painting was commencing we were still in the final stages of finishing the driveway repaving and a few other exterior projects were underway.  So while it was not ideal for them to be stuck in the room, it at least gave me time to get their space done to my liking.  They did however make a bit of a mess, but it wasn’t anything a bit of water and soap couldn’t clean up. 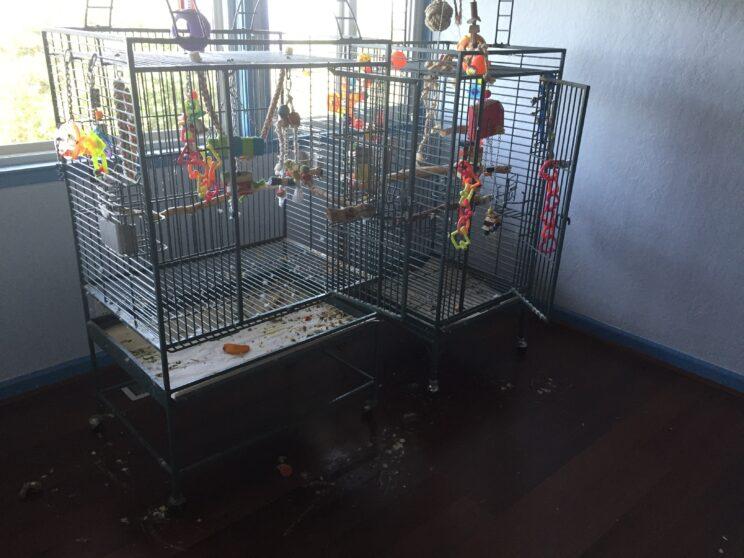 I managed to have a lot of fun putting together their “new” space. For example, when I was at Michael’s to get an item framed, I spotted this little wall hanging.  I thought it was interesting, but it was $42 so I passed it up and figured with some wood and mason jars I could make something similar.  Then when I went to pick up the print I had framed, the item was on sale for just $16 so I bought two of them.

I then took them apart and proceeds to paint them.  The backing board I painted the same color as the walls so they’d blend in and then the frames themselves were painted dark green. Then I found some mostly bird-proof cacti at Home Despot and I had something living to place on the walls.

Then tackled the matter of the getting better light blocking shades on the windows.  After much online investigation I hit up Blinds.com and had them ship me out some sample fabrics.  Then I figured out what patterns would compliment the colors I was using and placed my order. I went with a vertical leaf pattern and instead of just covering the top fixed window panes, I had them made to fit the length of both the top fixed and bottom crank windows.  That way only light from the transom windows gets into the space and the boys tend to sleep in a bit longer and thus not wake us up at the crack of dawn in hopes that I will stumble from our room to theirs to open their cages so that they can then follow me back to our bedroom where they then join us on the bed and go back to sleep. Then there was the matter of how to protect the floor.  When we first moved in we used a large piece of vinyl with a wood plank pattern.  We secured the edges to the wall but after a year, Thy learned that vinyl is fun to rip and shred.  As part of the project we also put down a new piece of vinyl, only this time we then set roof flashing atop it along the baseboards so that he can’t access the edges and begin his shredding terrorism. Here’s another shot of the flashing along with one of the fancy new outlet covers we bought. We figured why not get rid of the gross and old….so much so that we also bought a new furnace register cover too. As an added bonus, the new vinyl is light in color and thus–it camouflages the bird poop!  And to make cleanup even easier, we bought a fake grass rug and placed it under the cages so now anything they do drop tends to stay put and it’s a simple matter of using the shop vac once or twice a weak to remove the mess.

One final detail to the whole “mess containment” system was the installation of sections of foam insulation between the flashing and the walls.  You can see in the shot below that the foam fills the gap between the flashing and the wall and thus keeps any stray debris becoming trapped in the space.  You can also see the totally non-stellar patch job of one of the gaping holes I had to fill from the outlet boxes that were removed–I have since learned, thanks to our nearest neighbor, how to do a proper patch using drywall instead of the store bought screens. After all those little details, there were a few rather special touches made to complete the room…..